Fender is probably the heaviest name in the guitar manufacturing world. Its famous sound was even installed in some car stereo  systems manufactured by Volkswagen in North America after 2011. Fender is most know for electric guitars but I am sure every acoustic guitar player wants to own one.

Fender is an American manufacturer of stringed instruments and amplifiers. Its most known products are the Stratocaster and Telecaster. And although it was not the first to manufacture electric guitars, it managed to become commercially successful.

Fender began in 1938 in California with its founder, Leo Fender. He was a qualified electronics technician who serviced radios, phonograph players, musical instruments and amplifiers. Leo became intrigued by design flaws in amplifiers and began building his own. By 1945 he began manufacturing, while also servicing instruments but he soon became convinced that manufacturing would be more profitable. Fender came out with the Hawaiian lap steel guitar that featured a patented pickup and was sold together with an amplifier as a package. In 1946 the custom lap steel guitar would feature the famous big F logo.

Fender’s early success wasn’t only due to its founder and talented associates but also to marketing. Their ads and catalogs were innovative such as the “You won’t part with yours either” campaign. It featured people climbing into jet planes, surfing, scuba diving, skiing while holding Fender guitars. 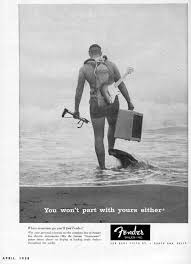 By 1960 Fender was successfully introduced into the surf/sports car culture of Southern California and became part of beach movies and surf music.

In 1965 Fender was sold to the cost-cutting CBS that lead to a reduction in quality. But  under this new management Fender manufactured some guitar models that were on the shelves up till then.

In 1985 the Fender employees purchased back the company from CBS and renamed it Fender Musical Instruments Corporation.